New Jersey Board Ignores Due Process and Purpose of Rule 8.2 to Reprimand Attorney for Judicial Criticism

A new Rule 8.2 case handed down in New Jersey last week demonstrates how disciplinary bodies do not let things like "due process" get in the way of using Rule 8.2 to sanction an attorney for critical comments about judges.

Benjamin C. Weiner was president and legal counsel for a Great Western Mineral and Mining, Inc.  (GW) which was a plaintiff in a legal malpractice case.  Weiner had hired an attorney named James Wiley to represent GW in the litigation.  The parties agreed to arbitration in front of a Pennsylvania attorney named Thomas Rutter.  The mining company lost the arbitration.  Later the arbitration decision was challenged in the Pennsylvania courts as being invalid because Rutter had not disclosed a conflict of interest he had.  The mining company lost that appeal and was likewise unsuccessful due to collateral estoppel, in a new lawsuit alleging tort and breach of conflict based on Rutter's conflict of interest.

Wiley conveyed to him a conversation he had with an opposing counsel in which that counsel stated that there was no way that a Philadelphia court or a state (appellate) court would decided against Thomas Rutter given his relationship with those courts, namely that as head of the largest alternative dispute resolution firm in Pennsylvania he was in a position to offer lucrative jobs to judges who want to leave the bench.

Weiner later initiated an action in the United States District Court for New Jersey claiming that he had been denied his due process rights.  He alleged that the Pennsylvania courts were beholden to certain of the defendants, including Rutter, and that the decisions of those courts were the result of a corrupt conspiracy.

Weiner was charged with a Rule 8.2 violation for his federal court filings.  What is most noteworthy about the case is that at the evidentiary hearing before the District VC Ethics Committee (DEC), the Disciplinary Oversight Committee (the body that prosecutes disciplinary matters in New Jersey) did not even bother to call a single witnesses even thought it had the burden of proof of showing that Weiner had made a false statement in violation of Rule 8.2.   Rather, the statements were just presumed to be false with the burden of proof on Weiner to prove they were instead true.

Weiner gave it a try though, asking to subpoena 45 witnesses, including 34 active and retired Pennsylvania judges.  All of Weiner's subpoena requests were denied.  The other evidence he introduced to try to show a corrupt Pennsylvania judiciary was ridiculed as being irrelevant. 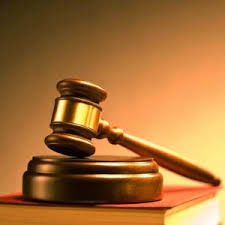 (I wrote earlier that Pennsylvania is the same state that produced the infamous "Kids for Cash" scandal in which Luzerne County judges were sentencing kids to private juvenile facilities in exchange for kickbacks.  A Commission later formed to study why the scandal happened criticized attorneys for knowing about the corrupt judges but failing to speak out.  My review of Pennsylvania Rule 8.2 cases showed that prior to the scandal breaking, three Pennsylvania attorneys had been accused of disciplinary violations for accusing judges of misconduct, with two suspended for five years and one disbarred.  Those cases undoubtedly had a chilling effect on attorney's willingness to accuse judges of wrongdoing and, as a result, the public was harmed.)

Weiner also argued that the First Amendment protected his speech.   The Disciplinary Review Board, the arm of the New Jersey Supreme Court which reviews the DEC's findings of fact and issues a judgment that appears to be nothing more than rubber-stamped by the New Jersey Supreme Court, simply ignored the First Amendment argument.  Likewise, the Board apparently did not understand or seem to care about the difference between the statement of a fact and the expression of an opinion, the latter of which was never intended to be covered by Rule 8.2.  Further, the Board simply ignored that the express purpose of Rule 8.2 is to protect "public confidence in the administration of justice," which was hardly threatened by Weiner's court filings that only a handful of people would have ever read.  Indeed it was the Disciplinary Oversight Board that made Weiner's criticism of the Pennsylvania judiciary much more public by filing the charges.

The Disciplinary Review Board found Weiner's "accusations against the Panels' members and resistance to the process were uncalled for as unprofessional and bordered on an independent ethics violations."  Given the due process violations and the Board's ignoring the purpose of Rule 8.2 as well as the First Amendment arguments, Weiner had every right to complain about the process.
Posted by Paul K. Ogden at 11:25 PM