Earlier this month, the Indiana Supreme Court disciplined yet another attorney for writing critically of a judge.  This comes as state supreme courts and disciplinary bodies across the country continue to ignore the First Amendment and the public figure actual malice requirements of New York Times v. Sullivan in order to use professional rules to target members of the bar who dare criticize judges. 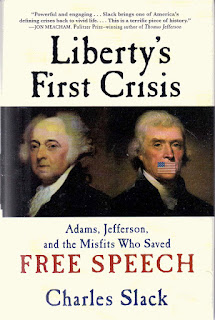 The notion that the law allows for special protection for judges more so than other public officials actually originated in Indiana with the 1979 Matter of Lendall B. Terry case which I wrote about before.  Spelled out in more detail in subsequent cases that piggybacked on Terry is the notion that the allowing attorney criticism hurts the public by undermining confidence in the judiciary.

That argument should sound familiar to students of history.  It is EXACTLY the same argument used by the Federalists in support of the 1799 Sedition Act that led to criminal prosecutions for critics of federal officials, including Federalist President John Adams.

A newly-released book, "Liberty's First Crisis: Adams, Jefferson and the Misfits Who Saved Free Speech," written by Charles Slack details the arguments for the adoption and enforcement of the Sedition Act, passed by the Federalist-dominated Congress in 1798 and signed by Federalist President John Adams.  The Sedition Act made it a crime to "write, print, utter, or publish . . . any false, scandalous and malicious writing" with respect to the United States and federal officials, including the President and members of Congress.  Vice President Thomas Jefferson, a Democratic-Republican who strongly opposed the Sedition Act, was excluded from the Sedition Act's protections.

Slack outlines the Federalists' claim that the Act was needed to protect the reputation of federal officials and prevent criticism from the undermining the actions of United States government.  The Democratic-Republicans in Congress argued that Sedition Act was contrary to the First Amendment Free Speech Clause and that it would be used to stifle critics.  Federalist congressmen countered that the First Amendment only protected prior restraint on speech and that it did not shield speakers from the consequences for their speech.  Federalists argued that if someone was going to criticize the federal government and its officials, they would not be punished if they could prove their statements to be true.

Slack then turns to detailing the criminal prosecutions that took place under the Sedition Act.  Sedition defendants included nearly a dozen critics, including a drunk who joked about wishing President Adams would get shot through the ass and Vermont congressman Matthew Lyon who opined that the President's "unbounded thirst for ridiculous pomp, foolish adulation, and selfish avarice."

Most of the prosecutions involved defendants who had expressed critical opinions instead of factual assertions.  (Hyperbole was also apparently a concept not known then or prosecutors simply didn't care.)  Federalist prosecutors wanting to make a name for themselves leveled charges against government critics which culminated with show trials conducted by Federalist judges.  Hapless defendants were not allowed to challenge the constitutionality of the Sedition Law  (The prosecutions predated judicial review being adopted in the 1803 case Marbury v. Madison.)  The issue before the jury was generally only whether the critical statement was made.  In most prosecutions, the issue of whether the statement was false was a judicial determination and the Federalist judges appointed by Washington and Adams always found that the criticism was "false."

The Federalists' argument for the Sedition Act and how it was applied to pursue critics are very well-known to me.  As an attorney, I am intimately familiar with Disciplinary Rule 8.2 which punishes attorneys for untruthful criticism of judges.  While Federalists argue that the Sedition Act is needed to prevent criticisms to cause people to lose faith in the actions of the federal government, state supreme courts declare that Rule 8.2 is needed to prevent attorney criticism from causing people to lose faith in the judiciary.  Like the Sedition Act prosecutions, Rule 8.2 attorney discipline prosecutions inevitable devolve into punishing attorneys for the expression of opinions about judges.  As my research into Rule 8.2 prosecutions shows, 98% of the time state supreme courts find the attorney criticism or opinion about the judge is "false" and punish the attorney speaker.  In some states, they even put the burden on the attorney to prove the criticism is true.

Slack's book about the Sedition Act concludes with a discussion of free speech around the world and the history of other assaults on Free Speech, including the Sedition Act of 1918, passed during World War I, and the current assault on politically incorrect speech on college campuses.  I would highly recommend it.
Posted by Paul K. Ogden at 3:41 PM